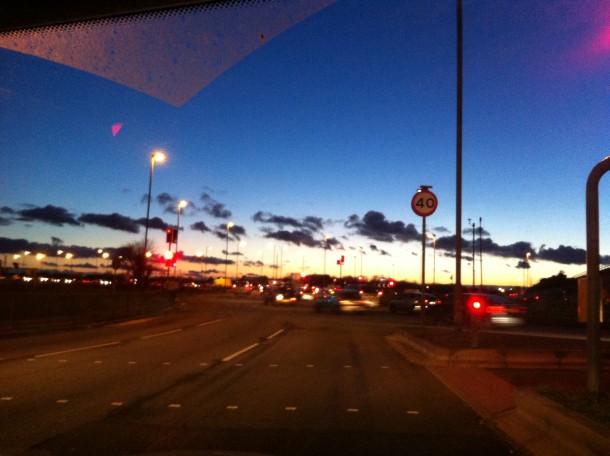 ‘I became a story sailors tell, the one about the old captain who travels the earth looking for the comfort the ocean used to give him, reading the shape of clouds as he once read the swell of waves.’

I’ve not long finished taking photos of the sky every day for a year.

I introduced the idea here; and here’s where the story ends.  Inevitably, given the subject, no matter how hard I tried to vary what I captured against or underneath the sky, there was an ever-increasing sense of repetition.  But that was an accepted part of it for me, to record the points at the ends of my regular itineraries and the skies above them.  Of course, there was seasonal repetition too.  Overcast skies seemed to dominate for long stretches of the year, but if you look hard at those skies, there are a thousand shades of grey, while blue is merely a continuous spectrum depending upon where you are looking.

It’s not the first time I’ve undertaken to do something of the sort.  In 1998, I attempted to record everything I ate and drank in the course of a year, following Georges Perec’s lead, though his Attempt at an inventory of the liquid and solid foodstuffs ingurgitated by me in the course of the year nineteen hundred and seventy-four was cumulative (‘One Belon oysters, three coquilles St-Jacques, one shrimps, one shrimp croustade…’ etc) rather than a day by day affair, as mine was.  For example, I can tell you that on February 16th 1998, I ate and drank the following: ‘Porridge, toast with hummus and celery, lentil shepherd’s pie and broccoli, one can Castlemaine XXXX lager, malt loaf, white grapes.’  Perec’s drinking (largely wine, rarely beer) was somewhat more refined than mine seems to be, to judge from this one entry.  And while his list is a journey through classic French cuisine, my entries have the matter of fact flavour of historical record buried in a time capsule, rather like ledgers detailing the outgoings of the great houses of the nobility in previous centuries.  They summon up the time and the young man I was, the man I am still – but also the man I am not, the man I am no longer.

This too will stand as a record of a year.  I’ll see the framing of certain skies and know exactly where I was on that day; or there won’t be quite enough to tell and I will have to scratch my head to remember, if I can.  I’m sure I learnt things about myself as in early 1999 I looked back across what I had eaten during the previous year (not always as wholesome as was the case on February 16th), though I confess I no longer remember what it is I learnt.  I’m not sure I was any more certain about the worth of this latest year-long project – sometimes it seemed an exercise in futility, although for the most part it felt like a valiant undertaking pursued for all the right reasons – but I’m prepared to have a stab at what I think I may have learnt from looking at the sky so much for a year.

I learnt to turn around and look behind me.

I learnt the limitations of the frame and to avoid the brightest part of the day.

I learnt how to be patient, to wait for the right sky.  I learnt that the sky doesn’t care for your troubles, though it may sometimes seem to mirror your joy.

I learnt that in a coastal town or city, seagulls will always photobomb your pictures – often to good effect, it has to be said.

I learnt the names of previously unfamiliar types of cloud, though sadly my year of photographs does not include any examples of either lenticular or noctilucent clouds.

I learnt that the most beautiful skies would always elude me.  Even now, a couple of weeks after the end, I see them from the car, and I cannot always be stopping to capture them, or I’d never make it to my destination.  Coastal skies, and skies from on high looking down over the plain beneath a line of hills.  Porchester Castle at sunset or sunrise.  Dawn, with the skeletal big wheel by the travellers’ camp site before it, strands of cloud like combed candy floss detaching from a cumulus mass in the wind.  A mackerel sky over the common.   Clouds like distant mountains.  Endlessly spreading cumulonimbus above the Isle of Wight, their splendour undimmed for being seen through the institutional grubbiness of my window at work.  Clouds like those depicted in Old Master paintings.  God skies, you might call them, without necessarily believing in God.

I learnt that you can never stop looking at clouds and seeing shapes in them.  Horses and dragons, VW Beatles and ships of the line.  There goes Italy, hotly pursued by a somewhat misshapen Australia, and coming after the countries, a sparrowhawk followed by a peacock.  I often thought of Peter Benson’s novel, The shape of clouds, the clouds being those which chase a retired sea captain to an abandoned, remote Cornish village, the clouds which witness his late-flowering love with the film star of both his early years and his dreams.

As I drive with my daughter, we play the shape of clouds game.  One evening recently, we saw a cloud resembling nothing so much as a giant heron gliding, migratory and magnificent in its thermal determination to get where it was going.

The skies that I captured are unrepeatable. They were mine, but I had the urge to share them, and I managed to sustain that across a whole year, save the single day that I missed, when a few words had to stand in for a thousand possible pictures.  So, though I more or less succeeded, I also failed, judged against the standard I set myself.

But at least I managed to end on the high note of a rainbow, to make up for the one I missed in the Highlands of Scotland, stopping the car in a lay-by on the way home in the fading light on the very last day of the sky-snapping year.  I don’t think I’ve ever seen a rainbow that late in a day before.  And so it became both my final sky and my covenant with you, the viewer.

See you on the other side of the rainbow. 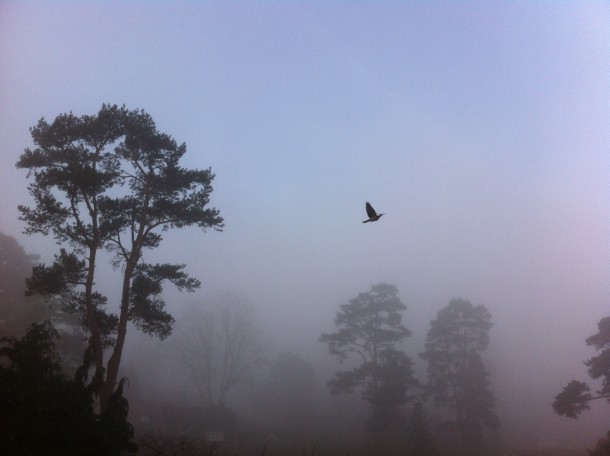 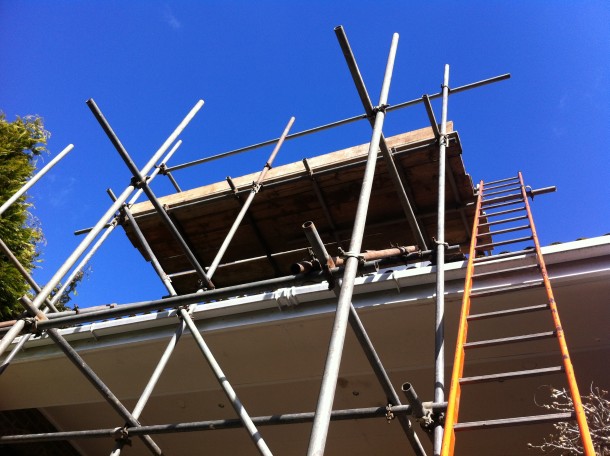 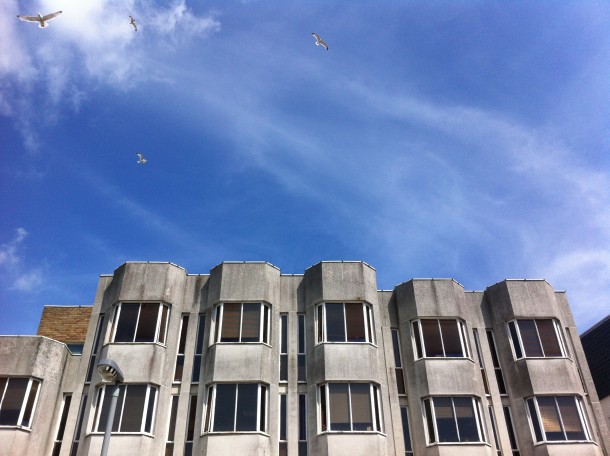 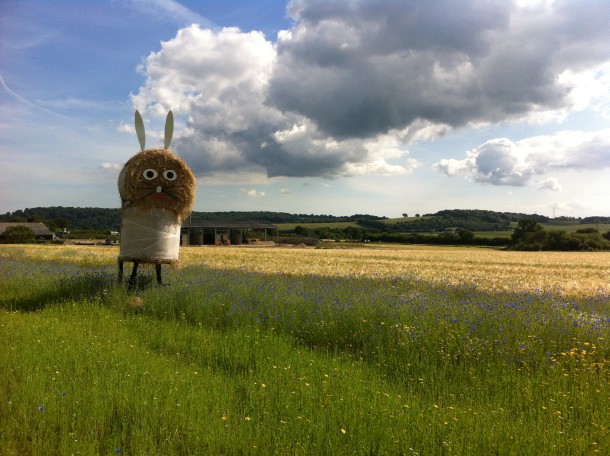 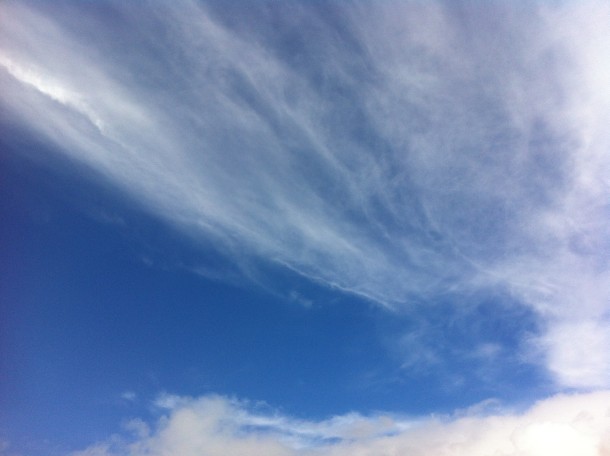 2 thoughts on “The shape of clouds”