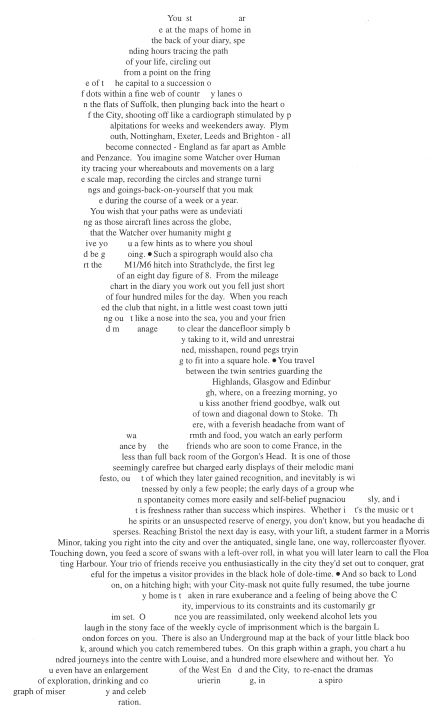 You stare at the maps of home in the back of your diary, spending hours tracing the path of your life, circling out from a point on the fringe of the capital to a succession of dots within a fine web of country lanes on the flats of Suffolk, then plunging back into the heart of the City, shooting off like a cardiograph stimulated by palpitations for weeks and weekenders away.  Plymouth, Nottingham, Exeter, Leeds and Brighton – all become connected – England as far apart as Amble and Penzance.  You imagine some watcher over humanity tracing your whereabouts and movements on a large scale map, recording the circles and strange turnings and goings-back-on-yourself that you make during the course of a week or a year.  You wish that your paths were as undeviating as those of aircraft lines across the globe, that the watcher over humanity might give you a few hints as to where you should be going.

Such a spirograph would also chart the M1 and M6 hitch into Strathclyde, the first leg of an eight day figure of 8.  From the mileage chart in the diary you work out you fell just short of four hundred miles for the day.  When you reached the club that night, in a little west coast town jutting out like a nose into the sea, you and your friend manage to clear the dance floor simply by taking to it, wild and unrestrained, misshapen, round pegs trying to fit into a square hole.

You travel between the twin sentries guarding the Highlands, Glasgow and Edinburgh, where, on a freezing morning, you kiss another friend goodbye, walk out of town and drop down to Stoke.  There, with a feverish headache from want of warmth and food, you watch an early performance by the friends who are soon to come France, in the back room of the Gorgon’s Head.  It is one of those seemingly carefree but charged early displays of their melodic manifesto, out of which they later gained recognition, and inevitably is witnessed by only a few people; the early days of a group when spontaneity comes more easily and self-belief pugnaciously, and it is freshness rather than success which inspires.  Whether it’s the music or the spirits or an unsuspected reserve of energy, you don’t know, but your headache disperses.

Reaching Bristol the next day is easy, with your lift, a student farmer in a Morris Minor, taking you right into the city and over the antiquated, single lane, one way, roller coaster flyover.  Touching down, you feed a score of swans with a left-over roll, in what you will later learn to call the Floating Harbour.  Your trio of friends receive you enthusiastically in the city they’d set out to conquer, grateful for the impetus a visitor provides in the black hole of dole-time.

And so back to London, on a hitching high; with your City-mask not quite fully resumed, the tube journey home is taken in rare exuberance and a feeling of being above the City, impervious to its constraints and its customarily grim set.  Once you are reassimilated, only weekend alcohol lets you laugh in the stony face of the weekly cycle of imprisonment which is the bargain London forces on you.

There is also an Underground map at the back of your little black book, around which you can catch remembered trains.  On this graph within a graph, you chart hundreds of journeys into the centre with Louise, and hundreds more elsewhere and without her.  You even have an enlargement of the West End and the City, to re-enact the dramas of couriering, exploration and drinking, in a spirograph of celebration and misery.